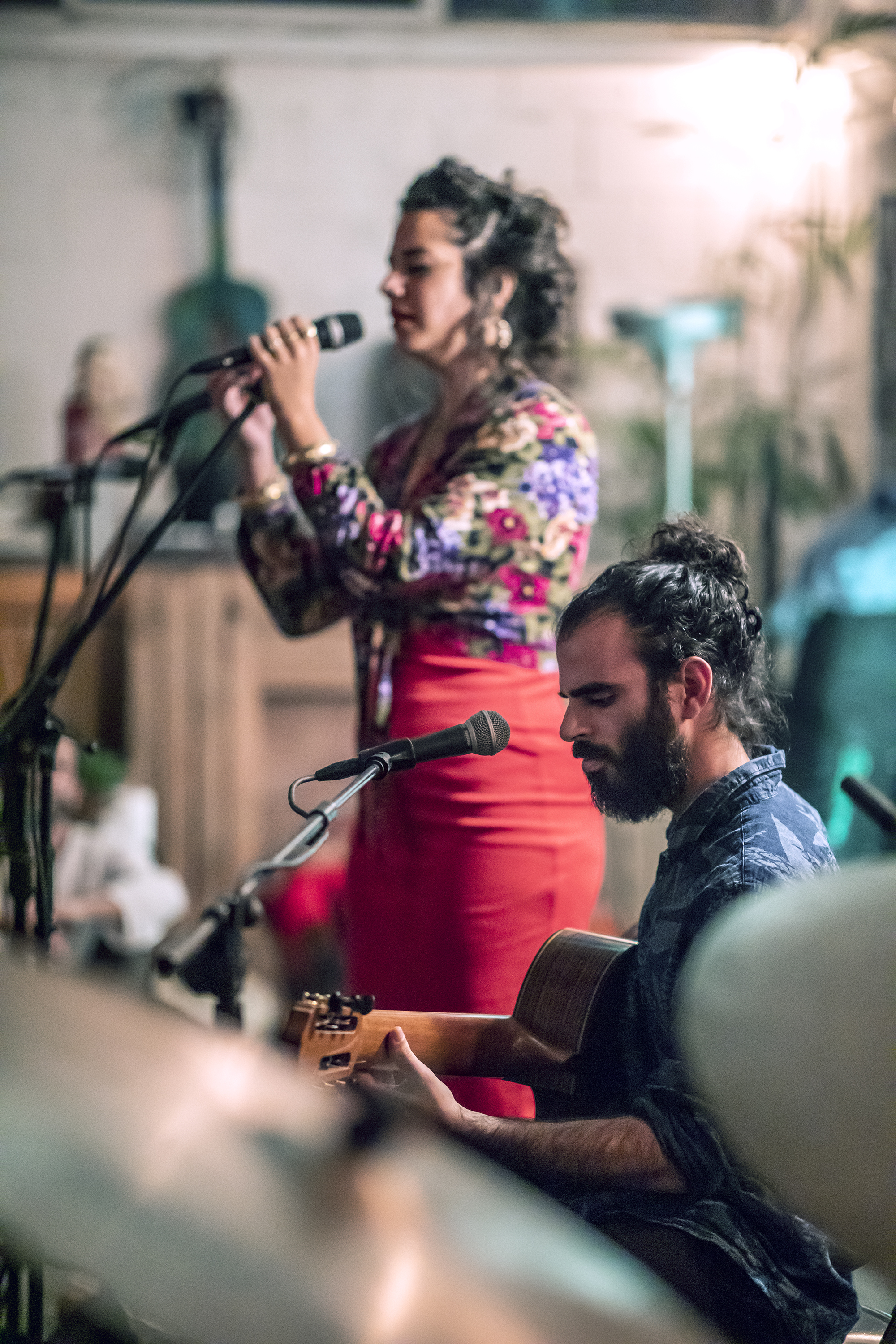 ARRIBAÇÃO: Your passion for Brazilian music started over a decade ago, when a friend gifted it to you the album Afro-sambas. What was the impact of this album on you?

During the time that you lived in Melbourne, have you studied Brazilian guitar with Doug DeVries? Talk about this experience and the importance in your trajectory.

I’d heard of the name Doug de Vries a few times but I didn’t know anything about him until I started lessons with him. I began listening to Baden around the same time that I moved to Melbourne in 2009 to study classical guitar at the Victorian College of the arts. During my second year I was searching for change, I needed to breath and play music that was relevant to my own culture and could give my guitar playing seeds to grow and develop into a musical language I could call home. During the Bachelor degree we had an option to study a secondary instrument so somehow I managed to convince them that Brazilian guitar was another instrument and I contacted the only guitarist who I’d heard of who taught Brazilian guitar to come and teach me at the uni. I had no idea what I was in for! From the first lesson I was totally captivated by Doug’s playing and continuously amazed at his depth of knowledge in Brazilian guitar and his love for the music of Baden Powell. I have to admit that I only understood most of what he was talking about years later after I had been to Brazil and done my kilometres playing the music with others, speaking the language and living the culture.

Do you usually listen to and be inspired by others Brazilian guitarists besides Baden Powell? Which ones?

Yes of course, there are so many! I’ll name a few that have inspired me, however, besides these great guitarists a major source of inspiration for me was coming to Brazil and being with guitarists and other musicians who aren’t well known but who really live the music, even if I was just walking with them down the street I could often feel the music running deep in their veins and for me this is everything.
Garoto, Raphael Rabello, Dino sete cordas, Paulinho Nogueira, Sebastião Tapajós, João Pernambuco, Dilermando Reis, Guinga, Yamandu Costa, Rogério Caetano, Gian Corrêa, Alessandro Penezzi, Marco Pereira

How was the Saravá formed? Did everyone meet in Tel Aviv?

The story of Saravá began when 18 year old Drummer Ben Ben Franklin riding his bike along the streets of Tel Aviv heard the sounds of samba from a distance. Following the sounds he saw a Brazilian busker by the name of Paulinho Ferreira on the street. For the first time in his life he asked the busker if he could join him and days later Ben Ben found himself getting called up to his first ever samba gig with Paulinho and I was playing guitar. During that time I was looking for a drummer to play Afro Samba with and I realised very quickly that this was the right guy, I’d never seen a drummer that young playing with so much fire and maturity.

How is the process of creating and choosing the arrangements of the songs?

When a new song comes to me it is usually accompanied by a feeling, I don’t have words to describe it because this feeling only comes with the formation of the ideas of a song. All of my songs so far have arrived by singing themselves inside my head. My first reaction to the new idea is usually to play it out on my guitar and then develop the musical material, add chords or maybe other sections until I feel a sense of a whole. I then stop and record it and leave it for a while. The next step is taking the composition to Ben Ben who always creates groove layers that add a new level of experience to the song, after working together to find colours of sound that feel good we call Daniel with his bass for a trio session. Daniel is really good at the big picture of the song, bringing it towards a final product and adding super bass grooves.

The Baden Powell Diaries has five episodes up to now, including the songs “Lapinha” and “Yemanjá”. How many episodes are planned? Can you tell us any of the next songs?

We already have ‘Deixa’, ‘Tempo de Amor’, ‘Manhã de carnaval’, ‘Berimbau/ Consolação’ and ‘O bem do mar’ recorded and now in the editing stages for release. We will record at least another 3 episodes but this project is likely to continue on for a long time with many more episodes.

How is the reception of Brazilian music in Tel Aviv?

Generally people here love Brazilian music! Records such as Eretz Tropit Yafa (País Tropical), which made Hebrew versions of popular Brazilian songs and turned them into classics in Israel are examples of how the music is embedded deep in the culture here. There are also many Brazilian people that call this place home and a large percentage of kids that grow up in this area learn Capoeira and are familiar with chants about the orixás. There is also a large population of Moroccan Jews living in Israel and and it’s fascinating to look at the musical connection between Morroco and Brazil, especially when you listen to the groove and trace it back to the routes of slaves.

Do you know other groups that play Brazilian music in Tel Aviv?

Yeah there are a few Brazilian music groups and musicians in Israel, most based in Tel Aviv or not far away. Marcelo Nami, Joca Perpignan, Paulinho Ferreira, Juares dos Santos, Chorole, Roi Ben Sira, Fernando Seixas, Baticumpe amongst others..

How is the production of the recording of Saravá’s first album? Do you have a release schedule?

Currently we are working on preparing the foundations for the recording, this means intensive rehearsals and working together on arrangements and the group sound. I’ll tell you a secret, we are actually preparing and planning now for the next 4 albums. The first one will be released this year but date will be published only after we finish recording.

What will the album be called?

The first album will be a short original music album showcasing the fresh acoustic sound of the trio. The second album will be dedicated to the music of Baden Powell. It will be a Saravá style Afro samba album and will feature Lala Tamar as one of the lead singers. The third and fourth albums we can talk about in the next interview.

In the Saravá videos on the YouTube channel, the singer Lala Tamar is a constant presence. How did you meet her and when did she start collaborating with the group?

This is a great question because our meeting marked a very special opening in my music. In 2017 I decided to do a summer tour in collaboration with a friend flamenco guitarist called Ofer Ronen who lives in Barcelona. The plan was to meet at his place and drive a van to Portugal where we had arranged a gig at Festival Andanças, stopping along the way in small towns to perform spontaneous concerts. As a last minute addition, two of Ofer’s friends joined the tour, one was flamenco singer Ana Casado, and the other was Lala Tamar, neither of which I’d met before or heard much about. The adventures that followed I’ll certainly never forget! Between, swimming in beautiful lakes, rehearsing in the van, randomly arriving at Anna Moura’s crazy country music concert and meeting her after the gig, playing music on top of castles, meeting Anat Cohen and Marcelo Gonçalves at Teju Bar jam session and nights of unforgettable folk dances at Andanças Festival. Tamar and I didn’t click instantly, I remember the first time we met, a quick glance followed by a sweaty hug that almost pushed me off my feet and a few awkward exchange of words. Every day of the tour was a new adventure and each day we discovered that we were connected in ways never imagined. By the end of the trip it was clear that we would meet again in Israel and begin to play music together. I’d like to add another part of the story that isn’t often told. Our first meeting was during the full moon, and each of our major meetings after the tour back in Israel until today happen with the full moon, completely unplanned.. maybe that’s why we are so connected to the Afro Sambas and songs about the Yemanja, the moon and the sea..

Is Brazil in the plans for a future Saravá’s tour?

Yes!! We are now planning a tour in Brazil around the end of the year/ start of next year depending on the world situation. Ideally our second album dedicated to the Afro-Sambas can only happen after we’ve experienced Brazil as a band and collaborated together with local musicians for a period of time. Aside from touring our music, the dream is to do a 1-2 week intensive residency / cultural exchange, with our Brazilian creative partners allowing the process of working together during the week to form strong intercultural relations. It’s about learning each other’s music and culture and rehearsing/ recording/ filming and by the end of the residency performing the outcome to local communities. This is the only way we’d like to record our music because the connection between people is what matters to us and from that place the music naturally comes out in amazing ways. We are currently searching for sponsors to help fund this project and would love to talk to anyone who might be interested in collaborating with us.